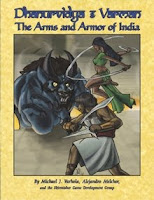 Skirmisher Publishing LLC is pleased to announce the release of Dhanurvidya & Varman: The Arms and Armor of India, a supplement licensed for use with the 4th Edition of the Dungeons & Dragons Roleplaying Game ($6.99, SKP E 1009, 64 pages; authors Michael J. Varhola and Alejandro Melchor). It is available as a PDF download through several online sales venues, including DriveThruRPG (http://rpg.drivethrustuff.com/product_info.php?products_id=79095&affiliate_id=200677), RPGNow (http://www.rpgnow.com/product_info.php?products_id=79095&affiliate_id=200677), and the Skirmisher Game Store (http://skirmisher.cerizmo.com/items/6220-dhanurvidya-varman-the-arms-and-armor-of-india).

This fully-illustrated supplement draws upon the history, mythology, and folklore of ancient and medieval India to present more than 70 new powers; full descriptions and statistics for 24 weapons and 20 items of armor or shields; two new weapon groups; and a section on familiar weapons that might appear in an Indian milieu.

While a few arms and armor items from India appear in traditional D&D campaigns, the region’s rich and colorful variety of armaments is largely unknown in most campaign settings. Such arms and armor can be used both to enhance the action of a traditional campaign and to punctuate the distinct, exciting adventures and characters possible in settings inspired by the vast region.

This book contains information about the weapons used throughout the Indian subcontinent — to include what are now the nations of India, Bangladesh, Pakistan, and Sri Lanka, along with the border regions of Afghanistan, Bhutan, Burma, Nepal, and Tibet — from the most ancient times right up to the pre-Colonial era. It also considers significant influences on the arms and armor of India, such as the 900-year Muslim domination of the region that began in the 7th century A.D.