These are two great new ways to stay up-to-date with what Skirmisher is doing and get exclusive benefits available only to members. 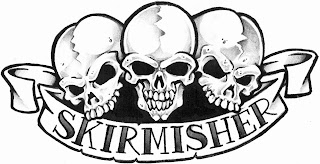 Posted by Michael O. Varhola at 9:36 AM No comments:

Following on a tradition it started in 2008, Flying Buffalo Inc. has announced the imminent release of its third-annual "Poker Deck" promotion.

"Each year I honor four famous game designers by making them a 'king' in my poker deck," said Flying Buffalo's Rick Loomis. "The other 48 cards are advertisements from various game companies, game stores, game artists, and game conventions."

The company will be producing 6,000 of these decks and using them as part of an associated game it will be running in conjunction with the various advertisers in the deck.

Skirmisher Publishing LLC will appear as the 3 of Clubs in the deck and will be participating in the "Poker Deck" games at both Origins and Gen Con. Skirmisher will also have a special freebie for anyone with one of the Poker Decks who comes by its booth as part of the promotional game.

To see samples of cards from this and previous years and all the companies participating this year, go to http://www.flyingbuffalo.com/pokerdeck.htm. For more information or to comment on this announcement, go to to page associated with it on the Skirmisher Forum.
Posted by Michael O. Varhola at 11:54 PM 2 comments: